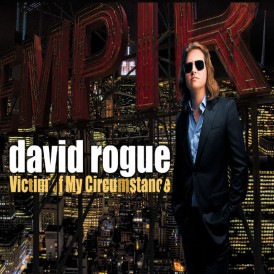 David Rogue’s journey to performing has been marked by many meaningful stops along the way. Born to a violin prodigy father and an artist mother, David was raised primarily in New York City but also has spent significant periods of his life in various other places in the U.S. and Europe.  A long-time poet, David always envisioned a life as a singer/songwriter and performer since his mother played him the Doors’ “Touch Me” off one of her old vinyl records when he was 8 years old.  Performing was never a feature of his childhood however.  His passion for singing and songwriting remained hidden from most people.  In fact, some of his closest friends during his formative years weren’t even aware of his desire to be a singer or of his inextinguishable dream of pursuing music as a career one day.

During his early years, David’s mother introduced him to an extensive catalogue of 60s greats such as Jimi Hendrix, Jay and The Americans, Lovin’ Spoonful and the Drifters to name a few.  While David did study piano for a couple of years as a child, that was the extent of his musical training.  He spent most of his childhood playing soccer and baseball, following his favorite sports teams, listening to all sorts of music, and dreaming one day of making his own records and performing his own songs on stage.

During his senior year at Dartmouth College in pursuit of a degree in English Literature and with the real world lurking around the corner, David decided that it was finally time to make a demo record.  After sending some raw recordings around, David came into contact with Paul Shaffer, musical director of the David Letterman show and the CBS Orchestra.  Shaffer ended up producing a demo record for David and brought together key members of the CBS Orchestra for the tracks.  Although the demo tape brought much excitement, David finished his degree, graduated magna cum laude, and followed his father’s wishes by entering the corporate world of Wall Street.  As David learned to become a successful businessman, his undying dream of becoming a singer and entertainer inevitably grabbed hold of him and placed him back on music street.

After putting his corporate life behind him, Rogue took an extended trip to Argentina with a close photographer friend.  Taking some time to travel and write music at that moment in time convinced Rogue that he was ready to share his songs and voice with the world, and shortly after arriving home in New York, he began to perform around his hometown in summer 2008 and released his debut EP “The Arrival” that September.

Singing at coffee shops with an acoustic guitar, David built a strong fan base in New York, and within his first year as a full-time musician, with over 40 shows to his credit, he made his way to the famous SXSW Austin, Texas music festival in 2009.  By this time, David had already garnered over 20,000 friends on MySpace.  Shortly thereafter, David began performing to capacity audiences at many of the New York City hot spots including Mercury Lounge, Canal Room and Rockwood Music Hall.  His fanbase and following continued to grow, and with over 100,000 YouTube views from his live performances and over 10,000 YouTube subscribers, a mention in the NY Post for his song “Why You Runnin’,” a nod from Citybuzz TV as a must-see entertainer, his song “Victim of My Circumstance” having been featured in the award-winning film “The Pill,” David felt it was time to record a full-length record.

On September 29th, 2012, David performed his new record “Victim of My Circumstance” for the first time to a sold out show at Joe’s Pub in New York. Since then, David Rogue has been seen and heard across the nation on “Fox News Live” with Laura Ingle, “Zach Sang and The Gang” radio show, “Celebrity Service,” “Artistdirect.com” and has received rave reviews praising his timeless songs, vocal abilities and his showmanship as the new up-and-coming entertainer of his generation.